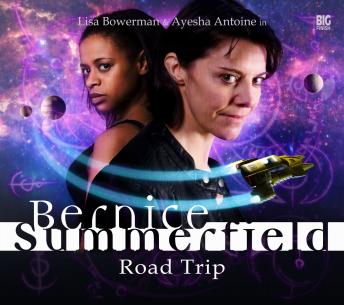 Brand Management, by Christopher Cooper
\"You\'re listening to Live Audio Stream G371, the only official source of government approved easy listening entertainment, as sponsored by the Dominicci Corporation. It\'s the thirteenth day of the thirteenth month, and that means just one thing, people - it\'s time to PARTAYYY...!\"
Bernice Summerfield needs a job. Professor Harry Burtenshaw thinks she\'s just the ticket. But with the people of Lyndyaz celebrating their most important festival, and the ruling Dominicci Corporation maintaining control with draconian glee, has Bernice turned up in the wrong place at the wrong time?

Bad Habits, by Simon Barnard & Paul Morris
Meet Sister Bernice - newest initiate into the order of Saint Celestion. Such is her devotion to the faith that she has undertaken a pilgrimage to the planet Agora, birthplace of the blessed Saint himself. The pilgrims aren\'t alone, however. Also on the planet is a team of archaeologists searching for the lost tomb of Celestion - a subject in which Sister Bernice seems curiously interested... In her quest to unearth an ancient relic that will point the way to Legion, Bernice will face some fearsome challenges: the dreaded Blood Beast of Thaloon, the randiest Bishop in the galaxy, and an ancient cult with some very bad habits indeed...

Paradise Frost, by David Llewellyn
Kaff Zarnak was once the holiday destination of choice for the rich and famous. At least, it was until the planet spun off its axis, and a deadly virus wiped out its population. Now it\'s absolutely the last place anyone wants to visit: a barren, ice-encrusted wasteland, sitting amongst the stars. So when Bernice and her loud-mouthed cab driver Ray are drawn off course, it\'s fair to say that they\'ve both had better days. Taking refuge inside the Xanadu Tower resort, the trio encounter Kaff Zarnak\'s only survivors... and maybe the only remaining clue to what took place there. But food supplies are low, Sandroaches are attacking on every side, and the only hope of their survival seems to be locked at the top of the Tower.
Perhaps there\'s a reason what happens on Kaff Zarnak stays on Kaff Zarnak...