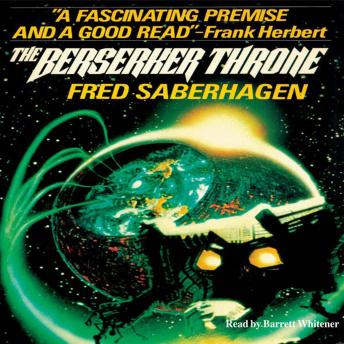 #7 of The Berserker Series

The Empress of the Eight Worlds has been assassinated. Prince Harivarman, exiled on the Templar Radiant, suspects that he will be the next victim. Help is scarce: Anne Blenheim, the fortress’ clear-eyed, fair commander, is favorably disposed toward the Prince, but her first responsibility is to the Templar High Command. And Chen Shizuoka, a Templar recruit sympathetic to Harivarman’s cause, is being stalked by planetary security forces. When Prince Harivarman discovers an operable Berserker—one of the asteroid-sized, spacefaring war machines that once destroyed their makers and all other life in their path—his first instinct is to turn it in. But then he finds an ancient code that will either allow him to control the dreaded machine or lead him—and everyone else on the Templar Radiant—to certain death.

This voice actor ruins this audiobook. He's one of these guys who pronounces every syllable very deliberately monotonously , so it sounds like a robot. Aside from that, there are two aspects to this book: A political aspect and an adventure aspect. The political side of the story is pretty dull, but the adventure side is actually quite exciting. I'm afraid this book really could have been better.