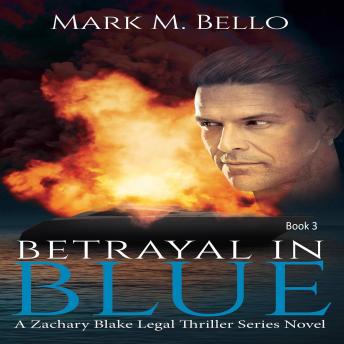 CUT OFF THE HEAD OF A SNAKE AND ANOTHER GROWS IN ITS PLACE . . .
Zack and Jack are Back!
White Supremacy again rears its ugly head in Dearborn . . .
Trial lawyer Zachary Blake tackled The Church and clergy sexual abuse in Betrayal of Faith and white supremacy and a bigoted POTUS in Betrayal of Justice. The super lawyer returns along with Dearborn Police Captain Jack Dylan for this third installment of the Zachary Blake Legal Thriller Series, an exciting journey through investigation, chase, deception, forensics, and trial.
Jack is in trouble with the law in a quaint northern Michigan fishing town, accused of murdering a terrorist. The local police and the FBI join forces to take him down. To prove his innocence—Captain Jack turns to an old nemesis . . . ZACHARY BLAKE
A dynamic cast of characters converges on Manistee, Michigan for the biggest trial this small fishing town has ever seen. Can Zack and Jack prevent the brotherhood in blue from morphing into a Betrayal in Blue? Part police crime novel—part courtroom drama. Hit the ‘buy’ button and grab Zachary Blake’s exciting new courtroom challenge today!
What readers are saying about Betrayal in Blue:
***** “Nail Biting Drama.”
***** “An exciting Police Procedural/Legal Thriller.”
***** “Excellent Courtroom Drama.”
***** “A Wonderful Series.”