The Betrayal of American Prosperity: Free Market Delusions, America's Decline, and How We Must Compete in the Post-Dollar Era 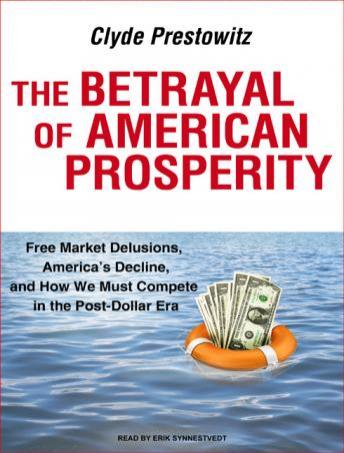 Critically acclaimed author Clyde Prestowitz reveals the shocking extent of the deterioration of American economic strength that has put the United States on the brink of irreversibly losing our supremacy on the world stage and our prosperity at home. While the financial crisis has been a devastating blow, he shows that the wreckage of our economic might started much earlier. If we do not make decisive changes fast, he reveals, we will face the daunting challenges of living in a post-dollar world: wielding less and less power over world affairs, vulnerable to rising security threats, and left with a permanently lower standard of living. There is nothing inevitable about this slide, he argues, but fighting back will require recognizing-and reversing-a glaring set of errors made by our business and political leaders due to ideological adherence to deeply flawed doctrines of always-efficient markets and the purely positive effects of globalization.

Providing a masterful history of the rise and decline of the brilliant 'American way' of building our prosperity, Prestowitz pinpoints exactly the set of ill-fated steps by which, starting in the 1970s, we turned away from the very strengths that had brought us to world leadership, gutting our capacity to produce truly first-rate, cutting-edge products and going massively into debt. He then lays out the urgent steps we must take to come booming back. The Betrayal of American Prosperity is an indispensable contribution to the urgent debate about the future of the American economy and our role in the world.

Betrayal of American Prosperity: Free Market Delusions, America's Decline, and How We Must Compete in the Post-Dollar Era