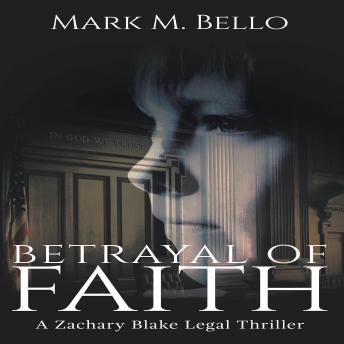 CAN ONE HAVE FAITH WHEN FAITH ITSELF IS CORRUPT?
SPOTLIGHT meets THE FIRM in this Award-Winning First Installment of the Zachary Blake Legal Thriller Series . . .
Zachary Blake—once Detroit’s King of Justice, his partners stole his practice—his wife kicked him out and took everything. He spends his time getting plastered at the local strip club or hustling traffic cases. Things are about to change . . .
The Coalition—the church’s super-secret organization whose leader will stop at nothing to protect it. Will these evil actors thwart justice once again?
Jennifer Tracy—a woman of deep faith and grim determination whose children have fallen victim to a vicious predator. Will the unconscionable evil of The Coalition victimize Jennifer and her boys a second time?
The three converge in Detroit for the trial of the century.
This compelling and realistic courtroom action drama spins a web of greed, power, and unspeakable acts of betrayal—will victims and perpetrators get the justice they so richly deserve? Bello keeps you guessing until the jury speaks . . . Scroll and hit the ‘buy’ button to find the answers in this controversial first Zachary Blake Legal Thriller today!
What readers are saying about Betrayal of Faith:
***** “One of the Best I’ve Read This Year.”
***** “Great Legal Thriller Candy for those that miss Old John Grisham.”
***** “Poignant, heartbreaking, relevant, and redemptive. Not one to miss.”
***** “Clear Your Schedule. You won’t want to put this down.”