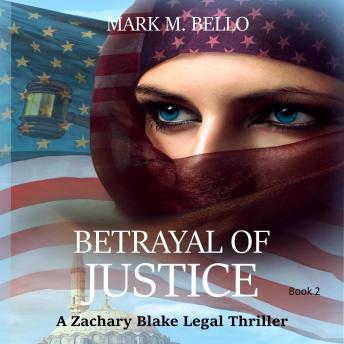 Zachary Blake returns. And who stands between his client and justice?
THE PRESIDENT OF THE UNITED STATES
In this second heart-stopping installment of the Zachary Blake Legal Thriller Series, Zack is fresh off his epic legal battle with the church’s clandestine evil forces in Betrayal of Faith. If you enjoyed the political angst of All the President’s Men or the realistic courtroom scenes of The Verdict, you will love this political-legal action thriller, where super trial lawyer Zack Blake takes on new, even more, powerful foes:
The New President—Hero of bigots and white supremacists everywhere—he promises to rid America of its “Muslim scourge” and “Make America Pure Again.”
The White Nationalist—Anti-Muslim, white supremacist bigot who plans an explosive event to honor his ‘exalted new leader.’
The Client—Arya Khan, a young Muslim-American woman falsely accused of murdering the evil bigot who firebombed her neighborhood mosque.
In a divided America, Arya becomes the centerpiece of the new president’s bigoted promise to his base. Can Blake defeat the power of the presidency and prove his young client’s innocence?
What readers are saying about Betrayal of Justice:
***** “Great Second Novel of the Zachary Blake Legal Thriller Series.”
***** “Fantastic as Always! Bello Scores Again!”
***** “Great Political Fiction.”
***** “As Pertinent as the Morning News.”