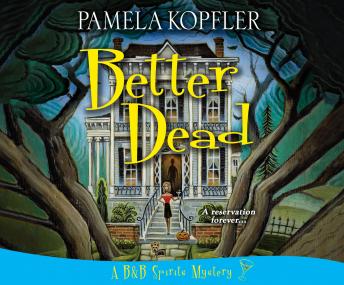 Burl Davis checked out of this life a little earlier than expected-before Holly could serve him with divorce papers over his extramarital flings. Unfortunately, it was not before he nearly bankrupted her beloved B&B, Holly Grove, a converted plantation that has been in her family for generations. Holly would never wish anyone dead, but three months later, she's feeling a lot more relief than grief. But then Burl's ghost appears as an unwelcome guest. Before his spirit can move on, her not-so-dearly departed needs Holly's help to bust up the drug-smuggling ring he was involved with. She has reservations, to say the least, but agrees to assist him if he'll make a show of haunting the B&B to draw in visitors. But when Holly's former love, Jack McCann, mysteriously resurfaces in town and checks in, she has to wonder if her B&B is big enough for the ghost of her husband and the very real physical presence of her old flame.