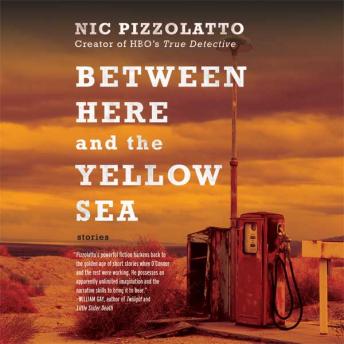 Between Here and the Yellow Sea

A reissue of Nic Pizzolatto's debut short story collection, now featuring two previously uncollected stories. Set in variety of Southern landscapes, these startling stories excavate the ambiguous terrain of the human heart. Pizzalotto finds beauty in loneliness as his characters attempt to bridge the gulfs between themselves and others, past and present, and, the even wider chasms that separate them from their true selves. In this stunning debut, a base-jumping, samurai park ranger parachutes off the St. Louis arch. A stained-glass artist struggles over his masterpiece for a castle in Southern Missouri and learn through great loss what his true subject will be. A schoolteacher searchers for her missing son, her only clue a mysterious, paint-smeared  stencil left behind. And, in the title story, which first appeared in the Atlantic Monthly, an orphaned young man and his former high school football coach set out the kidnap the coach's daughter from Los Angeles and bring her back to East Texas. With a forceful and compassionate voice, Pizzolatto places us at the crossroads of memory and desire, longing and loss, somewhere between here and the Yellow Sea.

Between Here and the Yellow Sea