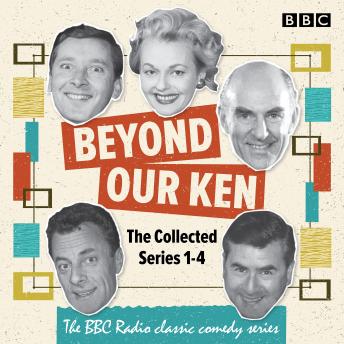 Beyond Our Ken: The Collected Series 1-4: The BBC Radio classic comedy series

An irresistible mix of of sketches, songs, puns and double entendres, Beyond Our Ken kept the nation laughing over seven series and 123 episodes between 1958 and 1964.

With its witty wordplay, zany humour and comic catchphrases, it remains every bit as hilarious and entertaining today. Featuring larger-than-life characters like Rodney and Charles, roving reporter Cecil Snaith and doddery duo Ambrose and Felicity - not to mention avuncular host Kenneth Horne himself - this 'sort of radio show' is full of classic comedy moments.

All your favourites are here in these 60 episodes, including spoof documentary series 'Hornerama', with its regular investigations into 'topics of immediate interest' such as showbusiness, shipping, photography, food, the City - and many more. There's also a wealth of surprising, surreal incidents from Kenneth Horne's week, the latest film releases in 'Picture Go Round', and a unique take on Any Questions, with panellists Hankie Flowered, Ricky Livid, Fanny Haddock and Arthur Fallowfield. Musical interludes are provided by a host of top artistes, among them Pat Lancaster, Janet Waters, The Malcolm Mitchell Trio, The Fraser Hayes Four and the BBC Variety Orchestra.