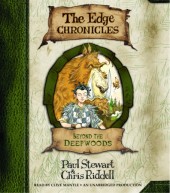 Beyond the Deepwoods: The Edge Chronicles Book 1

Far, far away, jutting out into the emptiness beyond, lies the Edge. Filled with strange peoples and terrifying creatures, this is a world unlike any other, where action–and danger–await at every turn. Abandoned at birth in the dangerous Deepwoods, young Twig has been brought up by a family of woodtrolls. He has always thought he was one of them, until, one cold night, he finds out he’s not. Soon he sets off to find out who he really is, and he does the unthinkable–he strays from the path.
So begins the heart-stopping adventure that will take Twig through a nightmarish world of goblins and trogs, bloodthirsty beasts and flesh-eating trees. Only two things keep Twig going: the hopes of discovering his true identity and finding his destiny.
Step to the Edge and enter a thrilling new fantasy series filled with amazing characters and unimaginable adventures--and see for yourself what lies beyond!

Beyond the Deepwoods: The Edge Chronicles Book 1