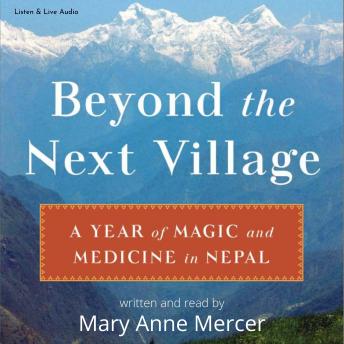 Beyond the Next Village: A Year of Magic and Medicine in Nepal

Beyond the Next Village is Mary Anne Mercer's memoir of discovery, growth, and awakening in 1978 Nepal, which was then a mysterious country to most of the world. After arriving in Nepal, Mercer, an American nurse, spent a year traveling on foot-often in flip-flops-with a Nepali health team, providing immunizations and clinical care in each village they visited. Communicating in a newly acquired language, she was often called upon to provide the only modern medicine available to the people she and her team were serving. Over time, she learned to recognize and respect the prominence of their cultural beliefs about health and illness. Encounters with life-threatening conditions such as severe malnutrition and ectopic pregnancy gave her an enlightening view of both the limitations and power of modern health care; immersed in villagers' lives and those of her own team, she realized she was living in not just another country, but another time. This unique story of the joys and perils of one woman's journey in the shadow of the Himalayas, Beyond the Next Village opens a window into a world where the spirits were as real as the trees, the birds, or the rain-and healing could be as much magic as medicine.

This title is due for release on May 11, 2022
We'll send you an email as soon as it is available!