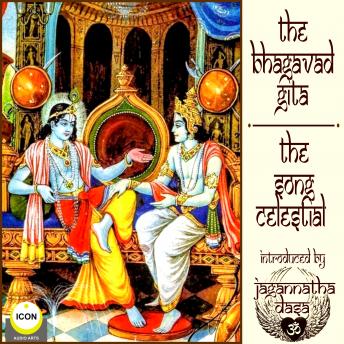 The Bhagavad Gita - The Song Celestial

'Because the Bhagavad Gita ('The Song Of God') is spoken by the Supreme Personality of Godhead Bhagavan Sri Krishna, one need not read any other Vedic literature. One need only attentively and regularly hear and read Bhagavad Gita.' A.C. BHAKTIVEDANTA SWAMI PRABHUPADA
'Those who have entered into a transcendental relationship with Krishna relish at every step the descriptions of the pastimes of the Lord.' Bhagavad Gita 10.18
The Bhagavad Gita, often referred to as the Gita, is a 700-verse 5000 year old Vedic scripture in Sanskrit which is part of the epic Mahabharata. The Gita is set within a narrative framework of a dialogue between Pandava prince Arjuna and his spiritual guide and charioteer, Bhagavan Sri Krishna. Here is the profound inspirational spiritual audiobook of the year. A must have for all sincere devotees of Krishna, devotional yoga practitioners, students of eastern philosophy, dedicated Hindus and even curious commuters. Here too is a great classical work perfect for all school and university systems.
JAGANNATHA DASA is the author of thirty two internationally best selling books published by the biggest publishers in the world from 1984 until today. He is also an acclaimed Hollywood film actor, director, designer, and is the voice on over 500 popular audiobooks.
Series producer Avalon Giuliano in New York
Produced by Alex Franchi in Milan
Edited and mixed by Macc Kay in Bangkok
ICON intern Eden Garret Giuliano