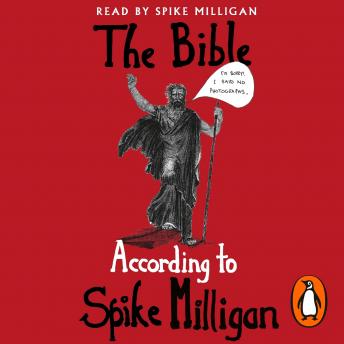 The Bible According to Spike Milligan

Spike Milligan's legendary war memoirs are a hilarious and subversive first-hand account of the Second World War, as well as a fascinating portrait of the formative years of this towering comic genius, most famous as writer and star of The Goon Show. They have sold over 4.5 million copies.

Penguin presents the unabridged, downloadable, audiobook edition of The Bible According to Spike Milligan, written and read by Spike Milligan.

'And God said, Let there be light; and there was light, but Eastern Electricity Board said He would have to wait until Thursday to be connected.'

There have been many interpretations of the Old Testament over the centuries but never one quite like this. Spike Milligan has rewritten, in his own inimitable style, many of the best-known stories of the Old Testament, featuring characters like King 'my brain hurts' Solomon, the great oaf of a giant Goliath and the lesser-known crossword clue, Hushai the Archite.

Believers and non-believers alike will enjoy this hilarious re-working, where the jokes, jests and jibes tumble over each other from Chapter One, Verse One until kingdom come.

Bible According to Spike Milligan