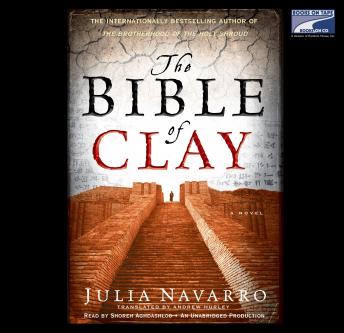 The Bible of Clay

In St. Peter’s Basilica, a man sits in a confessional asking forgiveness for a murder he’s about to commit. And a young priest begins a desperate journey to stop him. . . .

It’s only the beginning of a ruthless race among the world’s most powerful to find a rumored cache of sacred texts inscribed with the story of Creation as told by Abraham. This account, on tablets of clay, predates the Bible by a thousand years and could be one of the most important discoveries of all time. Archaeologist Clara Tannenberg’s announcement of an excavation to seek the tablets has set off shock waves of outrage, contempt, and outright disbelief. But among four old friends, bound through decades by shared tragedy, the announcement has renewed their hunger for revenge. For Clara’s reclusive, infamous grandfather Alfred is a man as feared as he is hated and his enemies will stop at nothing to destroy him–and will use anything as a weapon . . . even his granddaughter.

As Clara and her husband Ahmed put together a ragtag team to excavate the Bible of Clay from deep within the heart of Iraq, another far more sinister team is determined to get there first. Sweeping from the time of the biblical patriarchs to the front lines of the Iraqi conflict to the parties and back rooms of Washington, D.C., THE BIBLE OF CLAY is a thriller of unrelenting, thought-provoking, and all-too-plausible suspense.