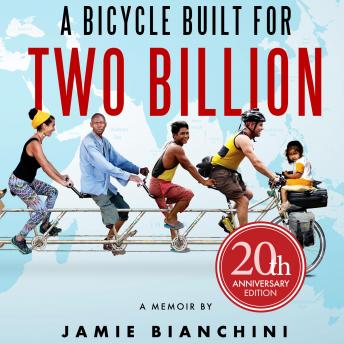 Jamie Bianchini needed a lift. A big one. After a series of spectacular business flops drove him into bankruptcy and the love of his life kissed him goodbye, Jamie knew he needed a world of help. But instead of seeking assistance from a counselor or support group, Jamie sought comfort where he'd always found it?on his bicycle.

As his world hit rock bottom, Jamie hatched a crazy plan that just might make everything right. His life lacked purpose, passion, and connection with his fellow man. So Jamie decided to go for a bicycle ride, around the world, on a tandem, solo, inviting everyone he met to join him for a spin.

Come join Jamie and his unforgettable cast of co-pedalers - from inspiring villagers to conniving thieves, romantic paramours to unlikely gurus, excited school kids to seniors who have never set foot on a pedal. Come join them all for the ride of your life. Includes nearly 200 spectacular photos and videos captured around the world, bringing this rich story to life.

This title is due for release on December 20, 2021
We'll send you an email as soon as it is available!