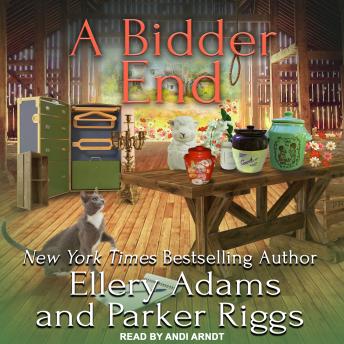 In the world of antiques and collectibles, it helps to have a sharp eye for quality, a good ear for gossip, and a nose for murder.

When a retired Hollywood A-lister decides to auction off part of his enviable collection of antiques, reporter Molly Appleby is thrilled to be covering the event for Collector's Weekly, and she's certain it will secure the reputation of the dealer handling it, a friend of hers. But soon after the final gavel comes down, the actor's secretary vanishes and the antiques dealer is found dead, apparently having taken his own life. Molly's not sold on the coroner's verdict of suicide, though, and she can't help but start digging for clues to what she suspects is foul play.

As she begins to delve into the private life of her friend and his connections with the actor's staff, Molly slowly discovers that the dealer was far more unscrupulous than she ever imagined and that nearly everyone who knew him had a motive for murder. And when another body turns up and the devious killer begins leaving mysterious clues to taunt Molly and the police, Molly finds herself facing a cunning culprit who wants to see her going, going, gone . . .