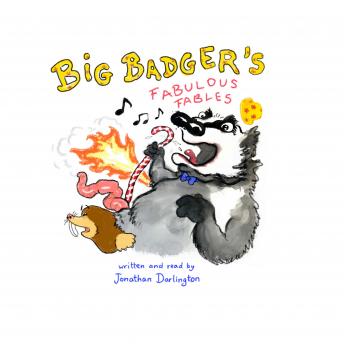 Three beautifully crafted and humorous tales of the amazing Big Badger. Perfect listening for young and old alike at home, in the car, at bedtime ... just any time really.

At the end of his riotous marriage ceremony to the glorious Mrs. Badger, the wicked Big Bird enters clothed in a magnificent disguise and enigmatically curses the newly weds. Egged on by his close friend the Mole they both set off for the Magic Mountain to stock up on their supply of magic with which to combat the fearsome creature. On the way they encounter a talking root and a singing, magical worm with three spinning heads called Cyril who guides them to their destination. Once there and before they can go in search of any magic, a friendly but clumsy dragon called Dick appears. He accidentally squashes one of Cyril's heads and proceeds to muddle up his spells in an effort to help. In a flash of inspiration he decides to fly off with them all on his back to seek the advice of the Man in the Moon.

- Big Badger gets married. Big Badger with his singing sets wedding bells a-ringing.
- Big Badger and Mole set off for the Magic Mountain. A Mountain, a Badger, a Mole and a Worm that's exceedingly drole.
- Big badger meets Dick Dragon. He'll land on the Moon before long because of a spell that goes wrong.
Cover design by Ned Darlington