The Big Con: The True Story of How Washington Got Hoodwinked and Hijacked by Crackpot Economics 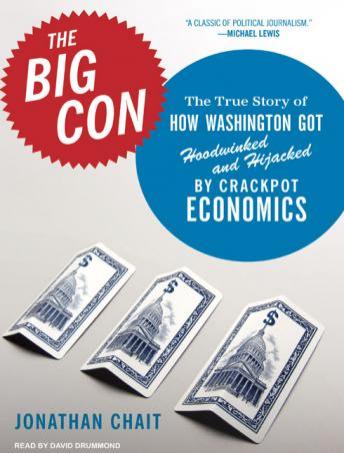 The Big Con is a brilliantly revealing look at how the radical ideas of a small group of economic hucksters have taken over the American political system and perverted our nation's policies.

American politics has been hijacked. Not by 'neocons' or 'theocons,' but by a fringe group of economic extremists obsessed with radical ideas that favor no one but themselves and their business interests. With dark and engaging wit, Jonathan Chait shows how over the past three decades these canny zealots have gamed the political system and the media so that once unthinkable policies-without a shred of academic, expert, or even popular support-now drive the American agenda, regardless of which party is in power.

Why have these ideas succeeded in Washington? How did a subset of fringe radicals take control of American policy and sell short the country's future? And how do they continue to do so despite repeated electoral setbacks? Chait tells the outrageous and eye-opening story, expertly explaining just how politics and economics work in Washington. Through vivid portraits of self-interested politicians and pseudoeconomists, with wry analysis of their bogus theories, Chait gives us the tools to understand what's really behind economic policy debates in Washington: a riveting drama of greed and deceit.

Big Con: The True Story of How Washington Got Hoodwinked and Hijacked by Crackpot Economics