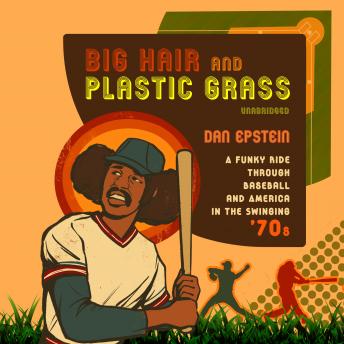 Big Hair and Plastic Grass: A Funky Ride Through Baseball and America in the Swinging '70s

The Bronx Is Burning meets Chuck Klosterman in this wild pop-culture history of baseball's most colorful and controversial decade.
The Major Leagues witnessed more dramatic stories and changes in the '70s than in any other era. The American popular culture and counterculture collided head-on with the national pastime, rocking the once-conservative sport to its very foundations. Outspoken players embraced free agency, openly advocated drug use, and even swapped wives. Controversial owners such as Charlie Finley, Bill Veeck, and Ted Turner introduced Astroturf, prime-time World Series, garish polyester uniforms, and outlandish promotions such as Disco Demolition Night. Hank Aaron and Lou Brock set new heights in power and speed, Reggie Jackson and Carlton Fisk emerged as October heroes, and All-Star characters like Mark "The Bird" Fidrych became pop icons.
For the millions of fans who grew up during this time, and especially those who cared just as much about Oscar Gamble's afro as they did about his average, Big Hair and Plastic Grass serves up a delicious, Technicolor trip down memory lane.

Big Hair and Plastic Grass: A Funky Ride Through Baseball and America in the Swinging '70s