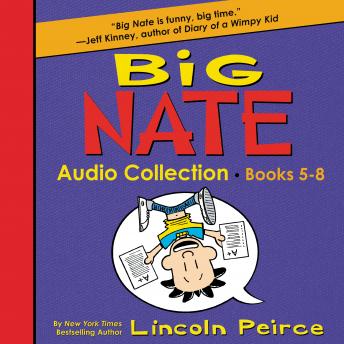 
This second audio collection of the Big Nate series is perfect for fans of the Diary of a Wimpy Kid series! In this collection enjoy the next four adventures of the New York Times bestselling series.

Big Nate Flips Out: Everyone knows N-A-T-E does not equal N-E-A-T!

And when Nate’s sloppiness gets out of hand, his best friend, Francis, is in serious trouble.

Can Nate clean up his act, or will he flip out first?

Big Nate: In the Zone: Nate’s not having the best of luck . . . in fact; he’s not having ANY luck. But with a little boost thanks to Chad’s lucky foot, suddenly good luck is everywhere Nate turns! Nate’s in the zone! But how long will it last?

Big Nate Lives It Up: BIG NATE IS LIVING IT UP!

Principal Nichols wants Nate to be buddies with new kid Breckenridge Puffington III and show him around. But that’s no easy task when Breckenridge is a plant-doodling total fun-sponge. There’s also something strangely familiar about this guy. . . . What in the world could it be?

Big Nate Blasts Off: BIG NATE IS BLASTING OFF!

Nate has a crush on Ruby. But after his scrap with Randy Betancourt makes headlines in the Weekly Bugle, he’s got a problem WAY worse than detention! Can Nate bounce back? And will the annual Mud Bowl be a blast . . . or a bust?