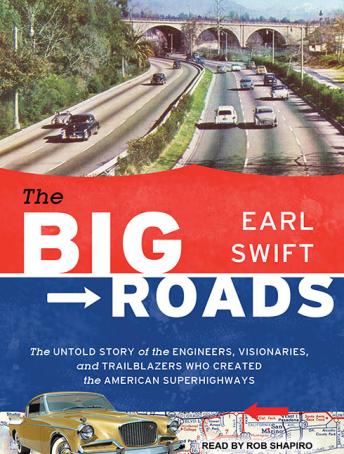 The Big Roads: The Untold Story of the Engineers, Visionaries, and Trailblazers Who Created the American Superhighways

A man-made wonder, a connective network, an economic force, a bringer of blight and sprawl and the possibility of escape-the U.S. interstate system transformed America. The Big Roads presents the surprising history of how we got from dirt tracks to expressways in the space of a single lifetime.Earl Swift brings to light the visionaries who created these essential highways as well as the critics and citizens who questioned their headlong expansion throughout the country, including:Carl Fisher, the irrepressible car-racing entrepreneur who spurred the push for good roads in the early years of the automobile, built the Indianapolis Motor Speedway, and made a fortune creating Miami Beach, only to lose it all;Thomas MacDonald, chief among a handful of driven engineers who conceived of the interstates and how they would work, years before President Eisenhower knew the plans existed;Lewis Mumford, the critic whose crusade against America's budding love affair with the automobile-and the ever bigger roads it required-now seems prescient;Joe Wiles, an African American family man turned activist, one of thousands of ordinary citizens in dozens of cities who found their homes and communities targeted by the concrete juggernaut-and were unwilling to be uprooted in the name of progress.In mapping a fascinating route through the dreams, discoveries, and protests that shaped these mighty roads, Swift shows that the interstates embody the wanderlust, grand scale, and conflicting notions of citizenship that define America.

Big Roads: The Untold Story of the Engineers, Visionaries, and Trailblazers Who Created the American Superhighways