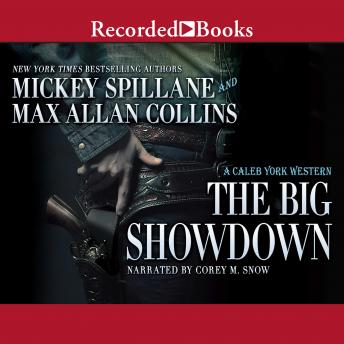 They killed the new sheriff. Now they'll have to deal with Caleb York. Times are changing. Caleb York is saddling up to try his hand as a Pinkerton man out California way. But before he can leave Trinidad, New Mexico, a peaceful morning erupts in a barrage of gunfire. When the dust settles, Caleb has gunned down two bad men, with another just dodging a ticket to hell . . . but leaving one very good man lying dead in the street. Lightning quick, Caleb rides after the fleeing gunman, only to be swept up in an evil wind blowing back through the sleepy town, threatening its very existence. Caleb s only chance to restore justice is to load his guns, dig in his spurs, and take on a ruthless killer. In a town drowning in blood, riddled with bullets, and hoping for a hero, Caleb York is the right man at the right time ready to face the vengeful outlaws in a chilling, storm-swept showdown.

This title is due for release on November 18, 2016
We'll send you an email as soon as it is available!