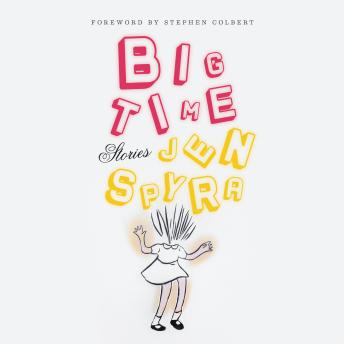 “Jen Spyra’s stories are shocking, silly, smart, and absurdly funny. Underline both those words, I don’t care how much it costs!”—Tina Fey

A bride so desperate to get in shape for her wedding that she enrolls in a new kind of workout program that promises the moon but costs more than she bargained for. A snowman who, on the wish of a child, comes to life in a decidedly less savory way than in the childhood classic. And in the title story, a time-hopping 1940s starlet tries to claw her way to the top in modern-day Hollywood, despite being ridiculously unwoke.

In this uproarious, addictive debut, Jen Spyra takes a culture that seems almost beyond parody and holds it up to a funhouse mirror, immersing the reader in a world of prehistoric influencers, woodland creatures plagued by millennial neuroses, and an all-out birthday bash determined to be the most lavish celebration of all time, by any means necessary.

Welcome, brave soul, to the world of Jen Spyra.