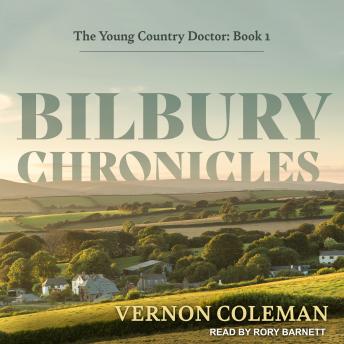 Bilbury Chronicles is the first of a series of books describing the adventures (and misadventures) of a young doctor who enters general practice as an assistant to an elderly and rather eccentric doctor in Devon, England. When he arrives in Bilbury, a small village on the edge of Exmoor, the young doctor doesn't realize how much he has to learn. But he soon finds the extent of his ignorance when he meets his patients. There is Anne Thwaites, who gives birth in the middle of a field and local rogue Thumper Robinson, who knows a good many tricks that aren't in any textbooks. And there is Mike Trickle, a TV show host, who causes great excitement when he buys a house in the village. The young doctor's employer is elderly Dr. Brownlow, who lives in a house that looks like a castle, drives an old Rolls Royce, and patches his stethoscope with a bicycle inner tube repair kit. The local pub, the Duck and Puddle, is run by Frank, the inebriate landlord, and the village shop is run by Peter, who also drives the local taxi, delivers the mail, and acts as the local undertaker. There is Miss Johnson, the receptionist with a look that can curdle milk; Mrs Wilson, the buxom district nurse, and Len, her husband, who is the local policeman with an embarrassing secret. And there is Patsy.