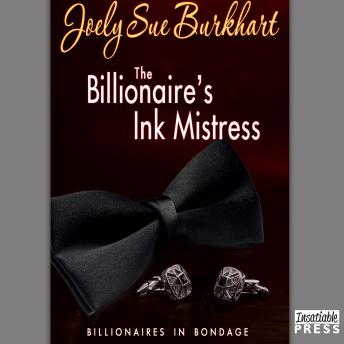 His desire for her pierces deeper than skin. Billionaire's in Bondage, Book 2. The Lawyer. Jackson Montgomery Warring never lets opposing counsel see him sweat. Juggling a dozen billionaire clients on a daily basis, he's always perfectly prepared, calm, cool and collected. Until he meets his best friend's fiancée, the luscious Mistress L. Now he wants a Mistress for himself. Badly. Except the one who's caught his eye is his complete opposite-a Goth-booted, tatted and pierced priestess of the local tattoo scene. The Inker. For over a year, Diana Temple has been too busy at her up-and-coming tattoo shop to throw one of her legendary BDSM parties. But for Jackson, she'll make the time, especially since the slick, fancy lawyer admits he likes to watch. The Secret. If she thought her edgy style might turn him off, she's happy to discover she's wrong. But when she learns his secret addiction, she might refuse to teach him a thing or two about submission. Or maybe she'll just punish him harder... Warning: A rich, successful attorney in a downward spiral, a tattoo artist who happens to be a Mistress, a secret addiction and a peek at exhibitionism/voyeurism.