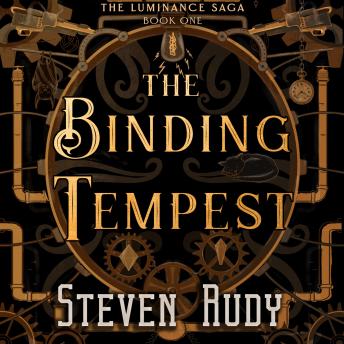 #1 of The Luminance Saga

“OMG! This epic book is one of my favorite books of the year!”


A fallen empire, a failed republic, a frontier of alchemy, airships, magic, & machines.

When the Peace King of the Free Cities goes missing, an aging former war hero Ellaria Moonstone uncovers a plot to overthrow the tenuous republic. Fearing that a powerful being called a Sagean Luminary has returned to build a new empire, Ellaria sends for help from old allies and expatriates scattered across the chaotic frontier.

Now three aging war heroes, long past their prime and haunted by their pasts, are all that stand against a dark entity threatening the future. In their quest, they find themselves unwittingly mentoring a new generation to fight alongside them. But trust between the once inseparable veterans is not what it once was and the evil they face has allies hiding in every shadow.

The Binding Tempest is the start of an award-winning epic Sci-Fi & Fantasy series, a High Fantasy Adventure injected with Steampunk science. The saga that proves Heroes get better with age.


Praise for The Luminance Saga:

“A dazzling, powerhouse… The expert combination of immersive storytelling and strong characters, makes for an unforgettable experience.”


“Highly recommended for steampunk fantasy and sci-fi fans interested in an epic work evolving on the scale of Lord of the Rings.”


“I’m sure this one will occupy my thoughts for a long time! Steven Rudy is an incredible writer. His words draw you in and hold you tight—every page is intense, intelligent, and entirely gripping, and I was hooked from the first line! This series will take the world by storm!”

This title is due for release on January 23, 2023
We'll send you an email as soon as it is available!