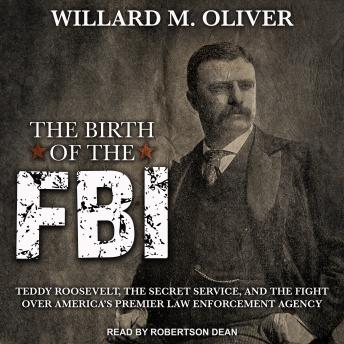 The Birth of the FBI: Teddy Roosevelt, the Secret Service, and the Fight Over America's Premier Law Enforcement Agency

Most people believe the Federal Bureau of Investigation began under J. Edgar Hoover in the 1920s or 1930s. Many also naturally assume it was developed for the express purpose of fighting crime. However, the reality is very different.

The reality is it began years earlier, in 1908, under President Theodore Roosevelt. In The Birth of the FBI, Willard Oliver details the political fight that led to the birth of America's premier law enforcement agency. Roosevelt was concerned about conservation and one issue he wanted enforced were the fraudulent land deals being perpetrated by many people, including some members of Congress. When he began using the Secret Service to investigate these crimes, Congress blocked him from doing so. The end result of this political spat was Roosevelt's creation of the FBI, which heightened the political row between the two branches of government in the final year of Roosevelt's presidency.

The truth of the matter is, the premier law enforcement agency in the United States was actually created because of a political fight between the executive and legislative branches of government. The Birth of the FBI reveals the true story behind the birth of the FBI and provides some useful insight into an important part of our American history.