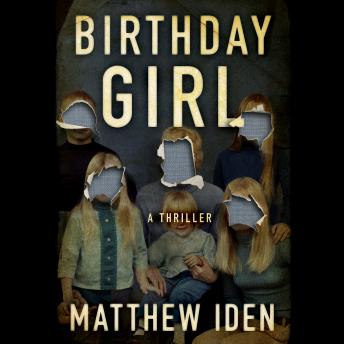 Blow out a candle. Make a wish. Your last one.

Eight years ago, Elliott Nash’s daughter was murdered. Since then, everything the brilliant former criminal psychologist had is a memory—his child, his career, his wife, and his home. Now he lives on the streets around Washington, DC, with only a bottomless well of guilt and nightmares to make him feel alive. Until Amy Scowcroft solicits his help.

She refuses to believe that her daughter, Lacey, who was kidnapped a year before, is dead. To the police, it’s a case gone cold. To Elliott, it’s redemption. In fact, Amy has stumbled upon an unnerving new clue: Lacey is just one of seven children from broken homes who vanished near their birthdays. Right now, it’s all they have to run with. Right now, they have no idea where the chase will lead.

As Elliott navigates the streets he knows so well, he and Amy will discover how dark they are—and how many secrets they conceal. Because in a search this harrowing, everybody has something to hide.

Great Audio! Missed my exit a few times from being so spellbound.

This was a GREAT mystery I would liken it to novels such as Along Came a Spider and Gone Girl.

Great story with curves. Too bad that there are people with power that disregard the value of others.

I really enjoyed this book and the narration was also great!

Brilliant read I was hooked from start to finish

Took me awhile to get used to a male voice reading as a female characters. Once I got past that it was fine.

I thought it was pretty entertaining and very interesting. You can start to figure it out, but still would recommend!

Not my favorite, the Author was over descriptive...ok on suspense.

Great book, hard to put down!!

This mystery grabs you immediately and then the surprising twists keeps you entranced.

It was very different. I was expecting more based on other reviews. The twist(?) at the end? Not a big deal...nothing to write home about. It was ok, a good little listen while waiting for my next months credits to kick in.

It's a good book, very sad story of loss and what it can do to people. It let's you see and feel the pain from both sides. Narrator also good.

I really enjoyed this book .. the twist at the end was shocking. I would defiantly suggest given this book a try

I really enjoyed this book. It really kept my attention. The narrator was excellent. Good mystery.