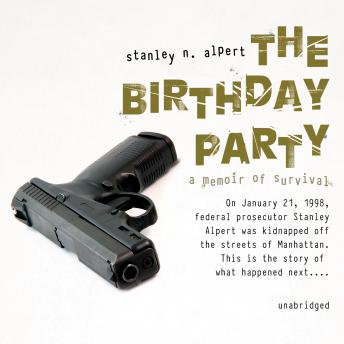 The Birthday Party: A Memoir of Survival

On January 21, 1998, the night before his thirty-eighth birthday, federal prosecutor Stanley Alpert was kidnapped by a car full of gun-toting thugs. Hoping to make a large withdrawal with his ATM card, they took him, blindfolded, to a Brooklyn apartment, and improvised. All night, his captors alternately held guns to his head, threatened his family, engaged him in discussions of “gangsta” philosophy, sought his legal advice, and even offered him sexual favors from their prostitute girlfriends as a “birthday present.” As Alpert talked with them, played on their attitudes and fears, and memorized every detail he could, his law-enforcement colleagues launched a major police and FBI investigation that would take many strange twists and turns. Filled with immediacy, drama, and extraordinary characters, The Birthday Party reads like a thriller—but every word is true.

This book proves that truth is stranger than fiction. This is so suspenceful that I could not put it down !