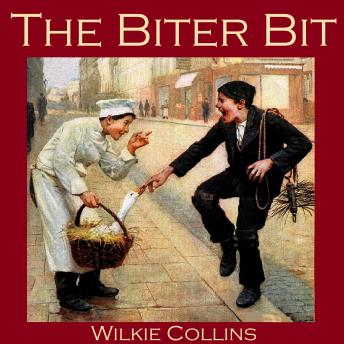 William Wilkie Collins (1824-1889) was an English novelist, playwright, and author of short stories and was a great friend and collaborator of Charles Dickens.

The Biter Bit is a detective story with a twist. A rookie investigator, Matthew Sharpin, has been thrust on Scotland Yard with instructions to try him out on a case. He is assigned the case currently being worked on by experienced officer Sergeant Bulmer. Sharpin has a very high opinion of his own capabilities, which leaves him in a minority of one, as it is clear to everyone around him that he is a bumbling idiot.

The story is told through the correspondence of the key characters, with Sharpin's rambling and incompetent reports taking centre stage. When it turns out, however, that Sharpin is not only inept but also corrupt, Chief Inspector Theakstone brings Sergeant Bulmer back onto the case, sending him Sharpin's reports and telling him that based on these, he ought to be able to solve the case in five minutes.

Bulmer is, of course, able to correctly interpret the evidence, which Sharpin has seen but failed to understand. But can the clever listener do the same?