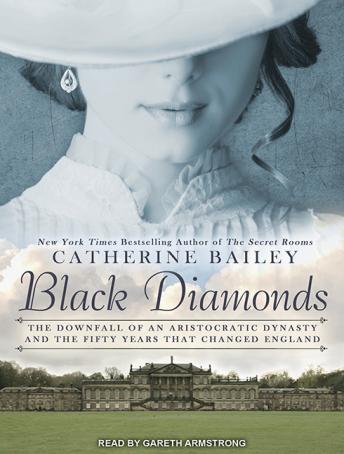 Black Diamonds: The Downfall of an Aristocratic Dynasty and the Fifty Years That Changed England

Fans of Downton Abbey now have a go-to resource for fascinating, real-life stories of the spectacular lives led by England's aristocrats. With the novelistic flair and knack for historical detail that Catherine Bailey displayed in her New York Times bestseller The Secret Rooms, Black Diamonds provides a compelling chronicle of the Fitzwilliam coal-mining dynasty and their breathtaking Wentworth estate, the largest private home in England.

When the sixth Earl Fitzwilliam died in 1902, he left behind the second largest estate in twentieth-century England, valued at more than three billion dollars in today's money-a lifeline to the tens of thousands of people who worked either in the family's coal mines or on their expansive estate. The earl also left behind four sons, and the family line seemed assured. But was it? As Bailey retraces the Fitzwilliam family history, she uncovers a legacy riddled with bitter feuds, scandals, and civil unrest, as the conflict between the coal industry and its miners came to a head.

Black Diamonds: The Downfall of an Aristocratic Dynasty and the Fifty Years That Changed England