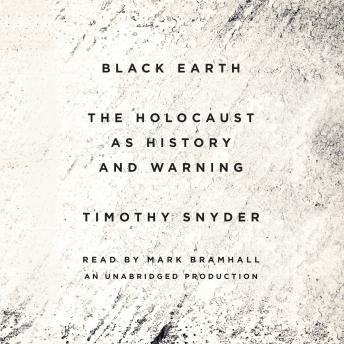 Black Earth: The Holocaust as History and Warning

A “gripping [and] disturbingly vivid” (The Wall Street Journal) portrait of the defining tragedy of our time, from the #1 New York Times bestselling author of On Tyranny

ONE OF THE BEST BOOKS OF THE YEAR—The Washington Post, The Economist, Publishers Weekly

In this epic history of extermination and survival, Timothy Snyder presents a new explanation of the great atrocity of the twentieth century, and reveals the risks that we face in the twenty-first. Based on untapped sources from eastern Europe and forgotten testimonies from Jewish survivors, Black Earth recounts the mass murder of the Jews as an event that is still close to us, more comprehensible than we would like to think and thus all the more terrifying.

By overlooking the lessons of the Holocaust, Snyder concludes, we have misunderstood modernity and endangered the future. The early twenty-first century is coming to resemble the early twentieth, as growing preoccupations with food and water accompany ideological challenges to global order. Our world is closer to Hitler’s than we like to admit, and saving it requires us to see the Holocaust as it was—and ourselves as we are.

Groundbreaking, authoritative, and utterly absorbing, Black Earth reveals a Holocaust that is not only history but warning.

*THIS REVIEW CONTAINS SPOILERS* In general I liked the book. I was with the author until the last 42 minutes of a narration that took some 16 plus hours. Then in his epilogue he referenced several current long term issues that are - in my opinion - not settled science. The writers support of Climate Change as settled science detracts from the presentation he put together surrounding the central issue - the Holocaust. I found his analogy between the science of ballistics - first developed by Issac Newton - and Climate Change - to be frightening juvenile. One topic is straight forward, easily experimented with, and simple. You can write the pertinent equations on a single sheet of legal pad using a No 2 pencil. The other topic is very complex, cannot be modeled accurately using the most sophisticated computers and has a history of 50 years - and many revisions during the period of its Climate Change sciences existence. So if the author made this jump of logic in the summary section of his work how many similar leaps did he take in the development of the body of the work. Good stuff but he destroyed my faith in his credibility.

This audiobook explores Hitler's rationale and approach to make Germany self sufficient like the world powerful US. We slaughtered and eraticated the American Indian to conquer their lands and food sources, hense his demented approach for the same end.