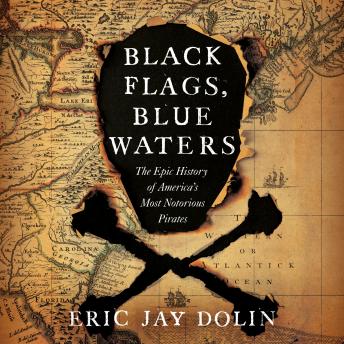 Set against the backdrop of the Age of Exploration, Black Flags, Blue Waters reveals the dramatic and surprising history of American piracy's 'Golden Age'-spanning the late 1600s through the early 1700s-when lawless pirates plied the coastal waters of North America and beyond. Bestselling author Eric Jay Dolin illustrates how American colonists at first supported these outrageous pirates in an early display of solidarity against the Crown, and then violently opposed them. Through engrossing episodes of roguish glamour and extreme brutality, Dolin depicts the star pirates of this period, among them towering Blackbeard, ill-fated Captain Kidd, and sadistic Edward Low, who delighted in torturing his prey. Also brilliantly detailed are the pirates' manifold enemies, including colonial governor John Winthrop and evangelist Cotton Mather. Upending popular misconceptions and cartoonish stereotypes, Dolin provides this wholly original account of the seafaring outlaws whose raids reflect the precarious nature of American colonial life.

Amazing book loved it all

Interesting historical account of pirates. A little plodding but still worth a read if you really like pirates.

Good read about the "golden age" of piracy. The narrator was a bit dull.

"Black Flags, Blue Waters: The Epic History of America's Most Notorious Pirates" is an amazing book. The lives of the various pirates, their crews, and often the illegal interactions with local businesses is far from the tales and movies we've heard and watched. The character of the various pirates run the gamut from relatively benign if that's possible to murderous villains'. I thoroughly enjoyed this book.

Great listen! Very informative and entertaining! I highly recommend this audiobook if you are interested in pirates

This is a great read if you like piracy and history. Very well written and keeps you wanting more

If I thought I loved pirates before, I didn't love them right.

Narrator has good diction, but this is not a good fit for a book about pirates. Also mispronounces some English place-names. The book is very interesting and well researched.

Good stories. But the narration is lethally dull. Do not listen to this book while driving!