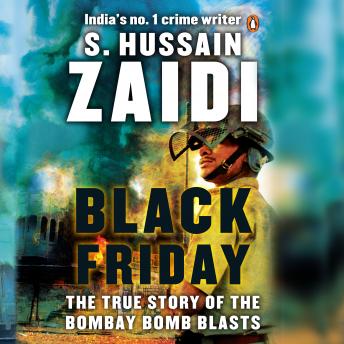 Black Friday: The True Story of the Bombay Bomb Blasts

'Black Friday by S Hussain Zaidi is a ghastly account of the one of the biggest terrorist attack on Bombay in 1993. The book chronicles the devastation caused to life and property due to the attacks and the trauma, both physical and mental, underwent by the people at large post the terrorist attacks and the consequent rift between the communities of Hindu and Muslims and hatred and clashes which often turned extremely violent. The book describes the events that resulted in the terrorist attack and the strong nexus between police, terrorists and underworld goons that materialised these attacks. S Hussain Zaidi gives us a detailed account of the massive investigation that unfolded the conspiracy and nexus of people involved in the attacks, some of whom happened to be from the Indian Administration. It depicts the criminal mind of some of the most notorious goons like Dawood Ibrahim and Tiger Memon, who along with others were the masterminds of the macabre plan to bomb Bombay. The book traces the true motive for the blasts in Bombay, wherein the ignominy between Hindus and Muslims fuelled the clashes and incidents of violence all of which culminated in the Bombay attacks. The pain inflicted on the Muslims minorities resulted in an unprecedented break of violence and social disorder paving way for the Bombay blasts. The book describes the nature of the characters namely the terrorists, corrupt government and law enforcement agencies who mediated with the terrorists, the prodigy of the Indian Investigation agencies who worked day and night to crack the mystery of the attacks and specifically the residents of Bombay whose indomitable spirit and resilience defeated the purpose for which the attacks were plotted. Black Friday was published by Penguin India in 2008 and is available in paperback.'

Black Friday: The True Story of the Bombay Bomb Blasts