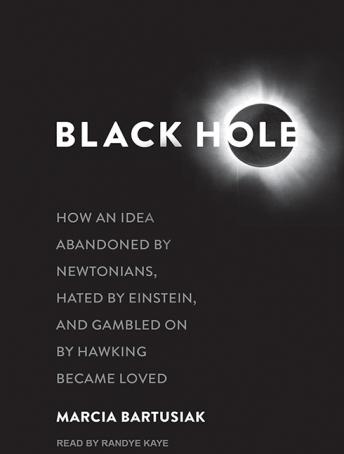 Black Hole: How an Idea Abandoned by Newtonians, Hated by Einstein, and Gambled on by Hawking Became Loved

For more than half a century, physicists and astronomers engaged in heated dispute over the possibility of black holes in the universe. The weirdly alien notion of a space-time abyss from which nothing escapes-not even light-seemed to confound all logic. This engrossing book tells the story of the fierce black hole debates and the contributions of Einstein, Hawking, and other leading thinkers who completely altered our view of the universe.

Renowned science writer Marcia Bartusiak shows how the black hole helped revive Einstein's greatest achievement, the general theory of relativity, after decades during which it had been pushed into the shadows. Not until astronomers discovered such surprising new phenomena as neutron stars and black holes did the once-sedate universe transform into an Einsteinian cosmos, filled with sources of titanic energy that can be understood only in the light of relativity. Celebrating the hundredth anniversary of general relativity, Black Hole uncovers how the black hole really got its name and recounts the scientists' frustrating, exhilarating, and at times humorous battles over the acceptance of one of history's most dazzling ideas.

Black Hole: How an Idea Abandoned by Newtonians, Hated by Einstein, and Gambled on by Hawking Became Loved