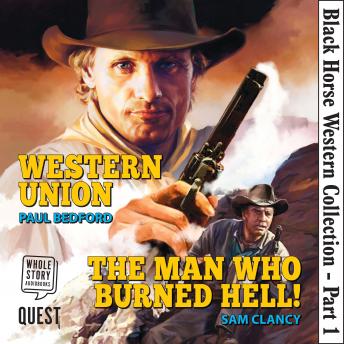 Saddle up and listen to a combination of two action-packed Westerns.
In Western Union: The year is 1861 and the nation is at war. The Western Union Telegraph Company intends to connect East with West as never before, but is beset by enemies. Wires are cut and telegraph poles burned, and then matters take a darker turn when a repair crew is massacred. The question is, who might be responsible? Could it be embittered Indians, belligerent Confederates, or even the Pony Express, which will surely go out of business as soon as the transcontinental telegraph is completed? Company boss Ezra Cornell employs a grizzled former Texas Ranger, known only as Kirby, to investigate. Paired up with young company employee, Ransom Thatcher, the two men head out across the vast northern plains in search of the deadly marauders. Then it belatedly dawns on Thatcher that if his companion is a Texan, that must also make him a Confederate, and yet another potential enemy!
In The Man Who Burned Hell! The little town was Serenity: in name and nature. Then the railroad and miners came, dragging violence and death behind them. Renamed Hell, the sleepy town changed under the rule of Ike Cordis. Known as The Devil, Cordis controlled The Three Horsemen, the fastest guns in town. Long forgotten was the fourth horseman - a man riding a blue roan. A man determined to make The Devil burn in Hell!