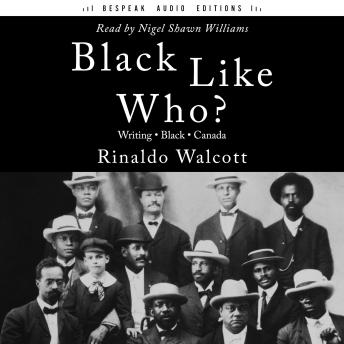 Rinaldo Walcott's groundbreaking study of black culture in Canada, Black Like Who?, caused an uproar upon its publication. With its incisive readings of hip-hop, film, literature, social unrest, sports, music, and electronic media, Walcott's book not only assesses the role of black Canadians in defining Canada, it also argues strenuously against any notion of an essentialist Canadian blackness. As erudite on the issue of American super-critic Henry Louis Gates' blindness to black Canadian realities as he is on rap, Walcott's essays are thought-provoking and always controversial in the best sense of the word. They have added and continue to add immeasurably to public debate.


Bespeak Audio Editions brings Canadian voices to the world with audiobook editions of some of the country's greatest works of literature, performed by Canadian actors.