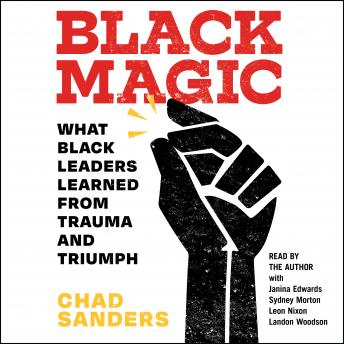 A “daring, urgent, and transformative” (Brené Brown, New York Times bestselling author of Dare to Lead) exploration of Black achievement in a white world based on honest, provocative, and moving interviews with Black leaders, scientists, artists, activists, and champions.

“I remember the day I realized I couldn’t play a white guy as well as a white guy. It felt like a death sentence for my career.”

When Chad Sanders landed his first job in lily-white Silicon Valley, he quickly concluded that to be successful at work meant playing a certain social game. Each meeting was drenched in white slang and the privileged talk of international travel or folk concerts in San Francisco, which led Chad to believe he needed to emulate whiteness to be successful. So Chad changed. He changed his wardrobe, his behavior, his speech—everything that connected him with his Black identity.

And while he finally felt included, he felt awful. So he decided to give up the charade. He reverted to the methods he learned at the dinner table, or at the Black Baptist church where he’d been raised, or at the concrete basketball courts, barbershops, and summertime cookouts. And it paid off. Chad began to land more exciting projects. He earned the respect of his colleagues. Accounting for this turnaround, Chad believes, was something he calls Black Magic, namely resilience, creativity, and confidence forged in his experience navigating America as a Black man. Black Magic has emboldened his every step since, leading him to wonder: Was he alone in this discovery? Were there others who felt the same?

In “pulverizing, educational, and inspirational” (Shea Serrano, #1 New York Times bestselling author of Basketball (And Other Things)) essays, Chad dives into his formative experiences to see if they might offer the possibility of discovering or honing this skill. He tests his theory by interviewing Black leaders across industries to get their take on Black Magic. The result is a revelatory and essential book. Black Magic explores Black experiences in predominantly white environments and demonstrates the risks of self-betrayal and the value of being yourself.