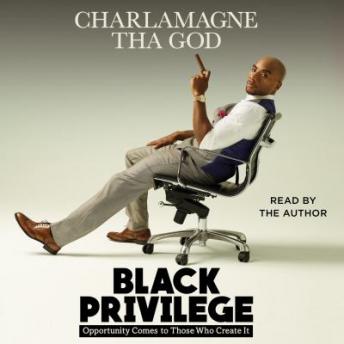 Black Privilege: Opportunity Comes to Those Who Create It

An instant New York Times bestseller! Charlamagne Tha God—the self-proclaimed “Prince of Pissing People Off,” cohost of Power 105.1’s The Breakfast Club, and “the most important voice in hip-hop”—shares his eight principles for unlocking your God-given privilege.

In Black Privilege, Charlamagne presents his often controversial and always brutally honest insights on how living an authentic life is the quickest path to success. This journey to truth begins in the small town of Moncks Corner, South Carolina, and leads to New York and headline-grabbing interviews and insights from celebrities like Kanye West, Kevin Hart, Malcolm Gladwell, Lena Dunham, Jay Z, and Hillary Clinton.

Black Privilege lays out all the great wisdom Charlamagne’s been given from many mentors, and tells the uncensored story of how he turned around his troubled early life by owning his (many) mistakes and refusing to give up on his dreams, even after his controversial opinions got him fired from several on-air jobs. These life-learned principles include:

-There are no losses in life, only lessons
-Give people the credit they deserve for being stupid—starting with yourself
-It’s not the size of the pond but the hustle in the fish
-When you live your truth, no one can use it against you
-We all have privilege, we just need to access it

By combining his own story with bold advice and his signature commitment to honesty no matter the cost, Charlamagne hopes Black Privilege will empower you to live your own truth.

Black Privilege: Opportunity Comes to Those Who Create It