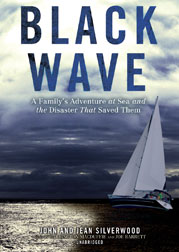 Black Wave: A Family's Adventure at Sea and the Disaster That Saved Them

When Californians John Silverwood and his wife Jean decided to take their four children on a sail around the world on their fifty-five-foot catamaran, Emerald Jane, they could not foresee the range of adventure that awaited them. The pressures of a family and a marriage in such cramped quarters were nothing compared to the terrifying forces of nature. But while in the South Pacific, just as it seemed to them that they had mastered every challenge, their world was shattered in a split second of unimaginable horror. Now the real test began, forcing them to fight for their very lives.

Black Wave: A Family's Adventure at Sea and the Disaster That Saved Them