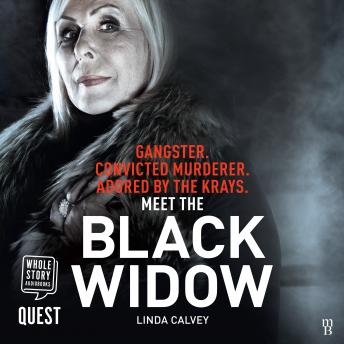 The Black Widow: The true crime book of the year

If you think you know everything about the East End's toughest gangsters, think again. Meet Linda Calvey, aka the Black Widow.

Growing up in the East End of London, Linda falls in with local gangsters including the Krays, Freddie Foreman and Ronnie Cook. When the love of her life, Mickey Calvey, is gunned down on a job gone wrong, Linda resolves to carry on his work. But in 1990, after years of living in fear of her lover Ronnie Cook, Linda finds herself accused of his murder, in a trial that shocks the nation. Still, Linda sticks to her code of honour, refusing to confess. Until now... After 18 years behind bars alongside notorious names including Rose West and Myra Hindley, she is released. This is the final truth about her life and what happened the day Ronnie Cook was murdered.

“'What a fantastic read, but not for the faint-hearted!'” - MARTINA COLE

I seriously loved this book. Linda's accent takes a bit of getting use to but as her story develops it makes it more real to know it is her. I would recommend this book to anyone

An amazing story from rags to riches and the price you pay!

Can’t get into it. I think it’s the narrator. Stopped listening

Honestly I couldn’t get 10 minutes in due to the lack of inflection by the narrator. I would consider reading it vs listening.

A really good read. Great insight to the life of criminals in the sixties, also knowing it is a true story written by the actual person's life experience makes is fascinating.

Slow start, but I’m glad I stuck with it. Narrator also takes a while to get used to yet she fits very well with the dialogue.

living in the east end of london in the 60s 70s

Really enjoyed listening to this book....the narration was a bit slow for me but i just speeded it up a bit in the app.....i was gripped from the start.....it probably wouldn't appeal to anyone who is a bit straight and obvlivious to the underworld.

It was pretty good. Kept my interest.

Loved the story and brilliant hearing Lindas voice! I was really thrown off by the lack of punctuation in the reading of the book. Really made it difficult for me to get into the story.

Really enjoyed listening to this book. I was pulled in from the very beginning.

Wow! I’m an avid reader, I read/listen to 2-3 books a week and this is one of the best I’ve heard in a long time. What an amazing story! It’s so good I couldn’t believe it was a true story. Well written and read by Linda Calvey!

I wasn't sure about this book when I started listening but I was drawn into the book. I couldn't stop listening.

Fantastic book I was hooked from first page

This was an incredibly personal view into the life of a woman who lived an unbelievable life! I enjoyed listening to the author narrate the book! I don’t think anyone else would do her justice, telling her life story.