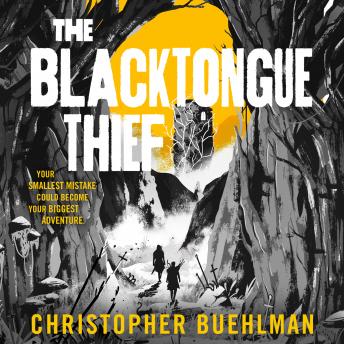 'This irreverent fantasy is narrated superbly by author Christopher Buehlman. Along with his firsthand knowledge of the text and how he means it to be conveyed, Buehlman uses nuance, inflection, and a casual way of saying outrageous things to continually tickle the funny bone.' -- AudioFile Magazine

Set in a world of goblin wars, stag-sized battle ravens, and assassins who kill with deadly tattoos, Christopher Buehlman's The Blacktongue Thief begins a 'dazzling' (Robin Hobb) fantasy adventure unlike any other.

Kinch Na Shannack owes the Takers Guild a small fortune for his education as a thief, which includes (but is not limited to) lock-picking, knife-fighting, wall-scaling, fall-breaking, lie-weaving, trap-making, plus a few small magics. His debt has driven him to lie in wait by the old forest road, planning to rob the next traveler that crosses his path.

But today, Kinch Na Shannack has picked the wrong mark.

Galva is a knight, a survivor of the brutal goblin wars, and handmaiden of the goddess of death. She is searching for her queen, missing since a distant northern city fell to giants.

Unsuccessful in his robbery and lucky to escape with his life, Kinch now finds his fate entangled with Galva's. Common enemies and uncommon dangers force thief and knight on an epic journey where goblins hunger for human flesh, krakens hunt in dark waters, and honor is a luxury few can afford.

“The Blacktongue Thief is fast and fun and filled with crazy magic. I can't wait to see what Christopher Buehlman does next.' - Brent Weeks, New York Times bestselling author of the Lightbringer series