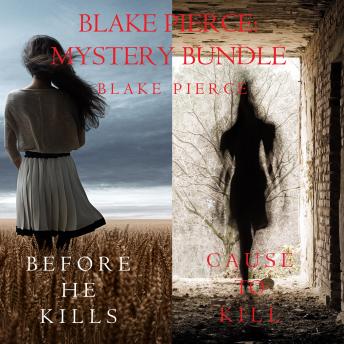 Blake Pierce: Mystery Bundle (Before He Kills and Cause to Kill)

A two-book mystery bundle by #1 bestselling author Blake Pierce, author of ONCE GONE, a #1 bestseller on Amazon with over 350 five star reviews!

Here is a bundle of the first books in two Blake Pierce series—the Mackenzie White and Avery Black series—all here in one convenient place. This bundle offers a great introduction to Blake Pierce’s series with over 140,000 words of reading.

In BEFORE HE KILLS (A MACKENZIE WHITE MYSTERY—BOOK 1), a woman is found murdered in the cornfields of Nebraska, strung up on a pole, the victim of a deranged killer. It doesn’t take long for the police to realize a serial killer is on the loose—and that his spree has just begun. Detective Mackenzie White, young, tough, smarter than the aging, chauvinistic men on her local force, finds herself called in grudgingly to help solve it. As much as the other officers hate to admit it, they need her young, brilliant mind, which has already helped crack cold cases that had left them stumped. Yet even for Mackenzie this new case proves an impossible riddle, something the likes of which she—and the local force—have ever seen. With the FBI called in, together, an intense manhunt ensues. Mackenzie, reeling from her own dark past, her failed relationships, and her undeniable attraction to the new FBI agent, finds herself battling her own demons as her hunt for the killer takes her to the darkest places of her mind.

In CAUSE TO KILL (AN AVERY BLACK MYSTERY—BOOK 1), Homicide Detective Avery Black has been through hell. Once a top criminal defense attorney, she fell from grace when she managed to get a brilliant Harvard professor off—only to watch him kill again. She lost her husband and her daughter, and her life fell apart around her. Trying to redeem herself, Avery has turned to the other side of the law. Working her way up the ranks, she has reached Homicide Detective, to the scorn of her fellow officers, who still remember what she did, and who will always hate her.Yet even they cannot deny Avery’s brilliant mind, and when a disturbing serial killer strikes fear into the heart of Boston, killing girls from elite colleges, it is Avery that they turn to. It is Avery’s chance to prove herself, to finally find the redemption she craves. And yet, as she is soon to find out, Avery has come up against a killer as brilliant and daring as she.

Dark psychological thrillers with heart-pounding suspense, BEFORE HE KILLS and CAUSE TO KILL mark the debut of riveting new series—and beloved new characters—that will leave you turning pages late into the night!

Blake Pierce: Mystery Bundle (Before He Kills and Cause to Kill)