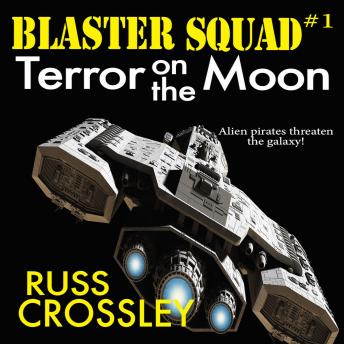 David A. Conatser
A free trial credit cannot be used on this title

In the 42nd century alien pirates steal a deadly virus threatening to wipe out billions of lives. A team of highly trained mercenaries known as Blaster Squad springs into action to stop the pirates deadly plot and save the galaxy from certain doom.

Blaze across the galaxy with Blaster Squad a new brand of mercenaries who are willing to break all the rules to win.

The charismatic leader of the squad is an expert with all weapons; knives, blaster rifles and pistols, and has a double black belt in Karate.

Nick has his own definition of right and wrong regardless of who disagrees that often leads to trouble.

She is the second in command. Siren is an expert in all forms of martial arts, and a deadly shot with a blaster pistol and rifle.

Her beauty and mysterious past make her a riddle within an enigma and a valuable member of the squad.

Born on the Mars colony Bones has enhanced strength due to the bones in his arms and legs being replaced with high tech composite metals.

A giant of a man skilled with all forms of weaponry who never shies away from certain death.

Half human-half half Cygnus IV alien hybrid. He's a scientific genius who can defeat any security system, can pilot any spacecraft, and has an eidetic memory. An expert with blasters and has enhanced vision due to ocular implants he is a deadly adversary when cornered.

Alfonso Ripe (aka The Kid)

The newest recruit to the squad he is skilled with explosives and blasters. He and Gears constantly butt heads and the tech genius doesn't trust him.

Nick isn't convinced he's a good fit for the squad, but for now they need his skills.

This title is due for release on December 23, 2017
We'll send you an email as soon as it is available!