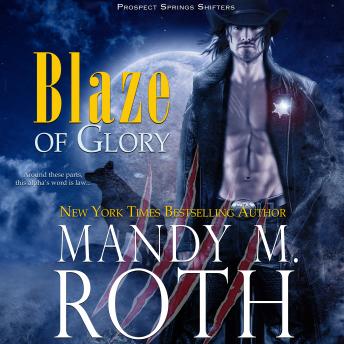 Sheriff Jonathan MacSweeny is in charge of keeping the peace in Prospect Springs. Frontier living isn't what it used to be. It's hard to survive in the New Old West and it's even harder when your area doesn't exactly embrace supernaturals--and you howl at the moon. That being said, he's good at his job and has a reputation with the ladies. When he learns his childhood sweetheart is to be married off to the town sleazebag, he goes in guns blazing to see to it she's his. Problem is, Molly isn't the same girl he remembers from ten years prior. Now she's a gun-toting, foul-mouthed, vixen with a badge of her own.


Special Marshal Molly Cogan never planned to set foot back in Prospect Springs. When her friend gets the harebrained idea to steal her identity in an attempt to protect her from the bounty the outlaws have on her head, Molly finds herself standing right smack dab in the middle of chaos--or home in her case. It isn't long before Jonathan is there, flashing that famous MacSweeny boy smile and tempting her in ways she wasn't prepared for. This heart-hardened Marshal has her work cut out for her if she plans to face her past fears and her past sweetheart.