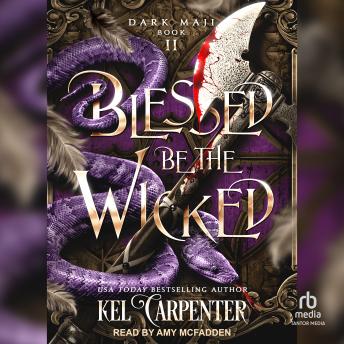 Blessed Be the Wicked

Some will try to trap her in hopes of harnessing her dark power. Others will seek to end her, deeming it too terrible to risk. In the end, he will destroy them all-because Quinn is his weapon, and he plans to keep it that way.

Lazarus was warned that Quinn's power might be too great, even for him, but nothing prepared him for the truth of it until she held a dagger over him, and he was powerless to stop it. Now at odds with himself, the future king of Norcasta must find a way to regain control of his house and secure an alliance with the Pirate Queen . . . before fate tips its hand once more, and his carefully laid plans are led astray.

Quinn's loyalty is not easily won, but Lazarus has managed to do it. Now the vassal and right-hand of Lord Fierte, Quinn seeks to gain him an alliance with Ilvas all the while challenging him at every turn. With the Cisean tribes won over, and the blood heirs behind them, Quinn expects this to be an easy task, but soon finds herself entangled in a web of lies.

Forced to gamble with her life-and the lives of her comrades-Quinn must make a choice that will either save or doom them all.

Blessed Be the Wicked