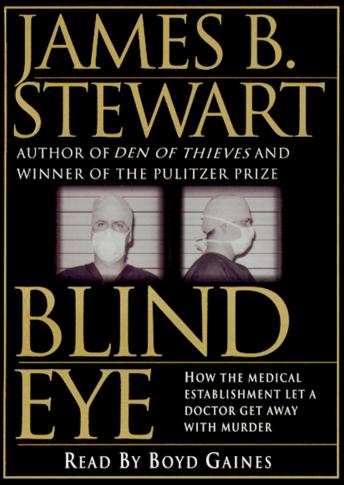 Written By: James B. Stewart

A medical thriller from Pulitzer Prize–winning author James B. Stewart about serial killer doctor Michael Swango and the medical community that chose to turn a blind eye on his criminal activities.

No one could believe that the handsome young doctor might be a serial killer. Wherever he was hired—in Ohio, Illinois, New York, South Dakota—Michael Swango at first seemed the model physician. Then his patients began dying under suspicious circumstances.

At once a gripping read and a hard-hitting look at the inner workings of the American medical system, Blind Eye describes a professional hierarchy where doctors repeatedly accept the word of fellow physicians over that of nurses, hospital employees, and patients—even as horrible truths begin to emerge. With the prodigious investigative reporting that has defined his Pulitzer Prize–winning career, James B. Stewart has tracked down survivors, relatives of victims, and shaken coworkers to unearth the evidence that may finally lead to Swango’s conviction.

Combining meticulous research with spellbinding prose, Stewart has written a shocking chronicle of a psychopathic doctor and of the medical establishment that chose to turn a blind eye on his criminal activities.

by James B. Stewart