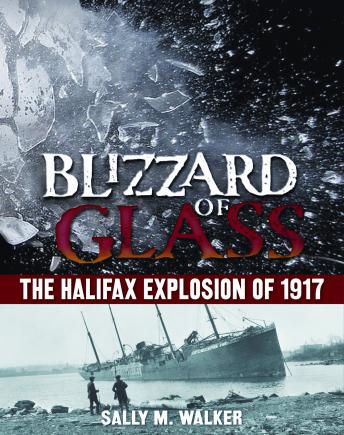 Blizzard of Glass: The Halifax Explosion of 1917

December 6, 1917, started like any other day in Halifax. But everything stopped shortly before nine o’clock that morning, when two ships collided in Halifax Harbour. One of the ships was loaded with munitions for the troops fighting in Europe; the other was preparing to collect medical supplies for the war’s victims.

The resulting disaster was the largest man-made explosion until the detonation of the atomic bomb in 1945. The blast flattened large areas of Halifax and the town across the harbor, Dartmouth. It killed nearly two thousand people. As if that wasn’t devastating enough, a blizzard hit the next day, dumping more than a foot of snow on the area and
slowing much-needed relief efforts.

This harrowing story of tragedy and recovery reveals the extraordinary strength and determination of a community in one of its darkest hours.

Blizzard of Glass: The Halifax Explosion of 1917