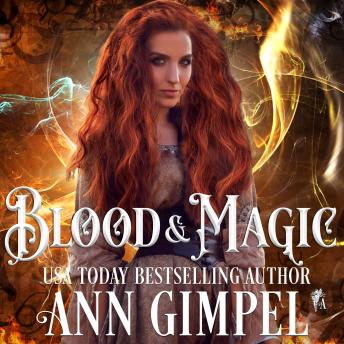 Blood and Magic: Paranormal Romance With a Steampunk Edge

Magic didn't just find Luke Caulfield. It chased him down, bludgeoned him, and has been dogging him ever since. Some lessons are harder than others, but Luke embraces danger, upping the ante to give it one better. An enforcer for the Coven, a large, established group of witches, his latest assignment is playing bodyguard to the daughter of Coven leaders.
Abigail Ruskin is chaperoning a spoiled twelve-year-old from New York to her parents' home in Utah Territory when Luke gets on their stagecoach in Colorado. A powerful witch herself, Abigail senses Luke's magic, but has no idea what he's doing on her stagecoach. Stuck between the petulant child and Luke's raw sexual energy, Abigail can't wait for the trip to end.
Luke is so attracted to Abigail, she's almost all he can think about, but he's leery too. The child is just plain evil. Is Abigail in league with her? It might explain the odd attack that took out their driver. In over his head, he summons enforcer backup.
Will they help him save the woman he's falling in love with, or demand her immediate execution?

Blood and Magic: Paranormal Romance With a Steampunk Edge