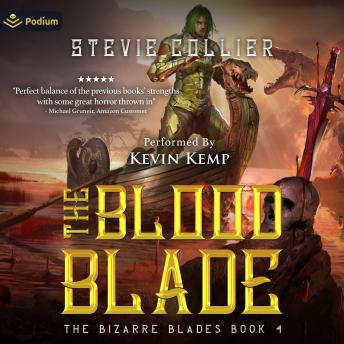 What kind of heartless monster could give the orders to begin a worldwide genocide? Only one … the Blood Blade wielder.

A dying Hex Hunter has the last laugh by transporting Ariel away from her friends using his Void Whip. Jade, in white hot anger, shoves his Phantom Blade into the man’s heart, killing him as well as losing any hopes of finding where the horrid Hex Hunter sent their Champion ally.

Soon, Finn finds himself once again in the presence of the Romantic Rogues who have called upon him and Jade to fulfill the debt that is owed to them. Before even launching on the legendary pirate ship, Finn encounters the largest meat-eating dinosaur he’s ever seen and the most powerful Whip Wielder he’s ever faced.

After surviving an intense fight on the beach, an insane naval battle between two pirate galleons, a sinking ship, and a village of cannibals who want him for soup, Finn discovers that he has a chance to end the treachery of the Gorgonops!

The magical races are sucking the world of its main source of energy and soon everything will be destroyed. Should Finn let this horrible genocide continue? Let thousands of innocents die for the sake of millions? Or should he swing the Jigsaw Blade in one final battle against the one who had his father hung from the rafters.

Either way, there will be blood …